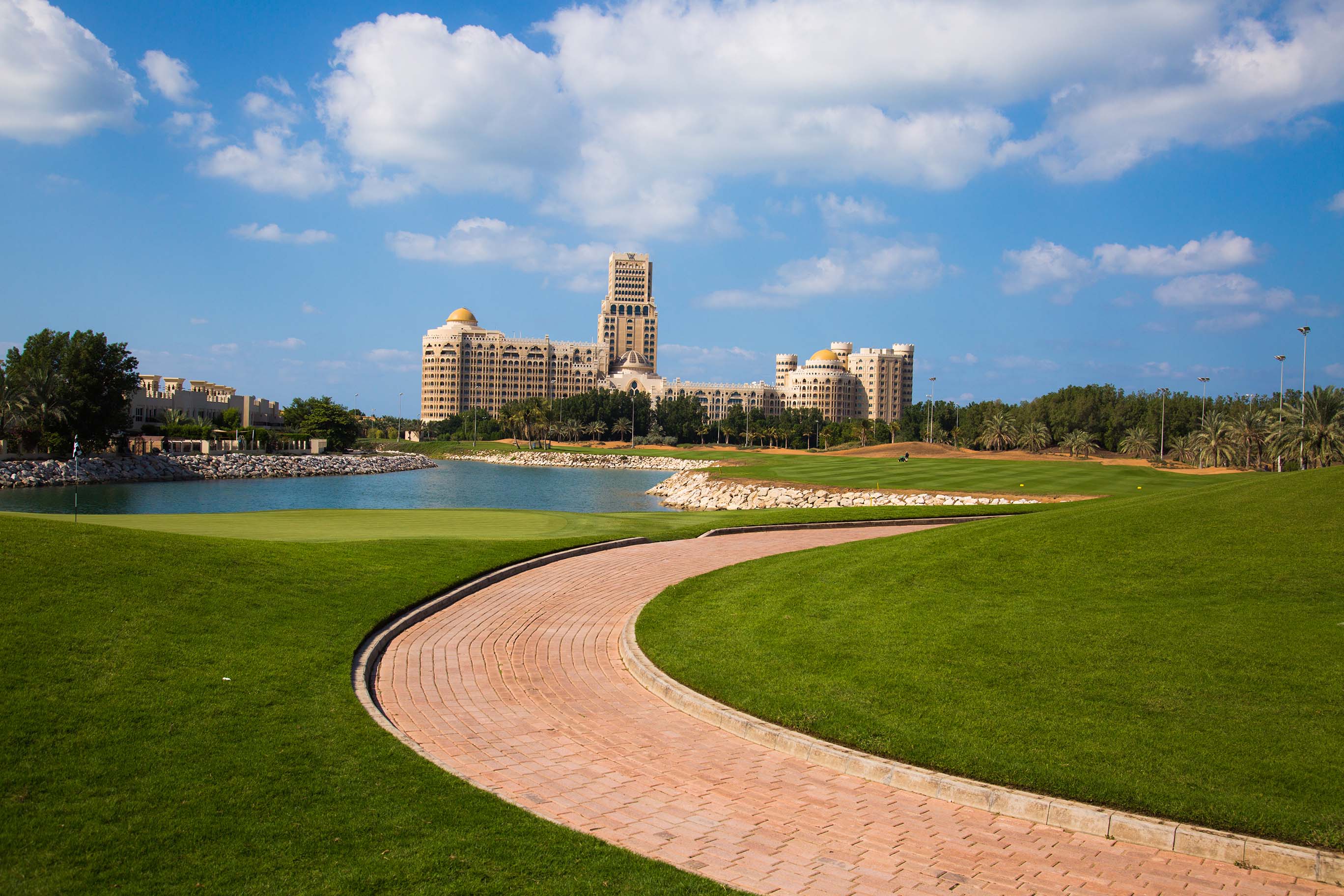 Ras Al Khaimah only began investing in tourism in 2010 and hasn’t looked back since. Don’t expect Dubai bling here, even though it’s only a 45-minute drive away. This is an Emirate that makes its spectacular natural assets the main prize; the Hajar mountains, the Al Awadi Desert and the miles of beaches and mangroves lying along its coastline.

But as far as the golfing world is concerned, it’s got another prize asset in the Al Hamra Golf Club. Admittedly, it’s not a natural asset in the true sense (although it does contain five million cubic metres of sand) it has managed to impress some serious golfing hierarchy enough to host the European Challenge Tour three years running and the recent Ras Al Khaimah Championship in February 2022. A pretty impressive roll call for such a young buck.

Designed by UAE resident Peter Harradine, (who has designed over 200 courses around the globe) it snakes its way around four giant open water lagoons while at the same time, always having the Waldorf-Astoria and Ritz Carlton hotels for company. With such well-heeled sentinels watching your every move, it’s an added pressure to playing a course that will keep you on your toes all the way round. It’s not just the amount of water you need to navigate, or the speed of the greens, or even the devilishly shaped bunkers. For me it’s the jeopardy of taking it on toe to toe thinking that a course with relatively gentle elevation will simply roll over and let you tickle its tummy.

I can officially announce that’s not the case. Off the black tees this is a very long test measuring over 7,300 yards par 72, and that makes every shot something to think carefully about.  Good course strategy is vital with fairways feeding into lagoons, steep run offs around the greens, and bunkers lying in wait to grab any wayward shot. The good news is there are five tee options to choose from making it eminently playable whatever your skill level.

Sagely advice on how to win

When I first had the privilege of playing Al Hamra, it was in 2017 in a pro-am prior to the European Challenge Tour event and had the benefit of a professional’s sagely advice. It proved so sagely we won it. A feat I have droned on about endlessly ever since. So, I confidently strode to the first tee with memories of taming this beast fresh in my mind.

The first two holes lull you into a false sense of security; no real water threat and easily reached in two. But reaching the third tee, you get your first taste of intimidation. A 576-yard par 5 with water running down both sides of the fairway before facing a long tasty second shot across the lagoon that still leaves a shot into a green perched by the water’s edge, so very little room for error.

Equally, the par 3 fourth hole at 163 yards will punish any pulled shot with a guaranteed watery demise. The next few holes are more defined by very long, shaped bunkers than the threat of water, so careful shot plotting might reward you with birdie opportunities, but the greens have subtle borrows that might well fool you.

Once you get to the turn though, water is back in play big time with the tenth a long 455-yard stroke index 1, par 4 belter, with an island green lying in wait. Another heart in mouth shot at eleven over water with most of the 189 yards carrying the lagoon to an island green. Twelve has water running all the way down the right side with a huge heart shaped greenside bunker to welcome you to the dance floor.

A short respite from water now, but two long holes. A 582-yard par 5 at fourteen followed by a short par 3 (cue loud guffaws) at 218 yards.

You can pause to catch your breath over the next, before the grand finale, a scintillating 576-yard par 5 that has it all including a short road trip across a bridge to get to it. It’s another intimidating tee shot with water running all the way down the right side of a long crescent-shaped fairway. There are also inlets that are hidden from the tee so it’s perfectly possible to hit a shot that looks safe only to find yourself taking a water penalty. It will take all your three shots to finally get to the green, but then you may face a three-tier putt depending on the position of the flag. It is a very memorable final hole.

You can drown your sorrows or rejoice your good fortune back in the clubhouse in the Bay Sports Bar terrace overlooking the 18th green with all-day dining until 9pm.

But the fun doesn’t end at sunset. Al Hamra Golf Course has nine of its holes lined with floodlights; the first seven and the last two, making up a tricky composite night-time 9 holes. I tried it and found the long shadows cast by the lights, upped the challenge a few notches. The changing perspective made judging distance pretty tricky on the fairway while on the green, measuring the borrow was even trickier. But that said, it offers respite from the sun in summer and who doesn’t like a bit of a golfing adventure.

*The article was originally published here by Andy Mossack. 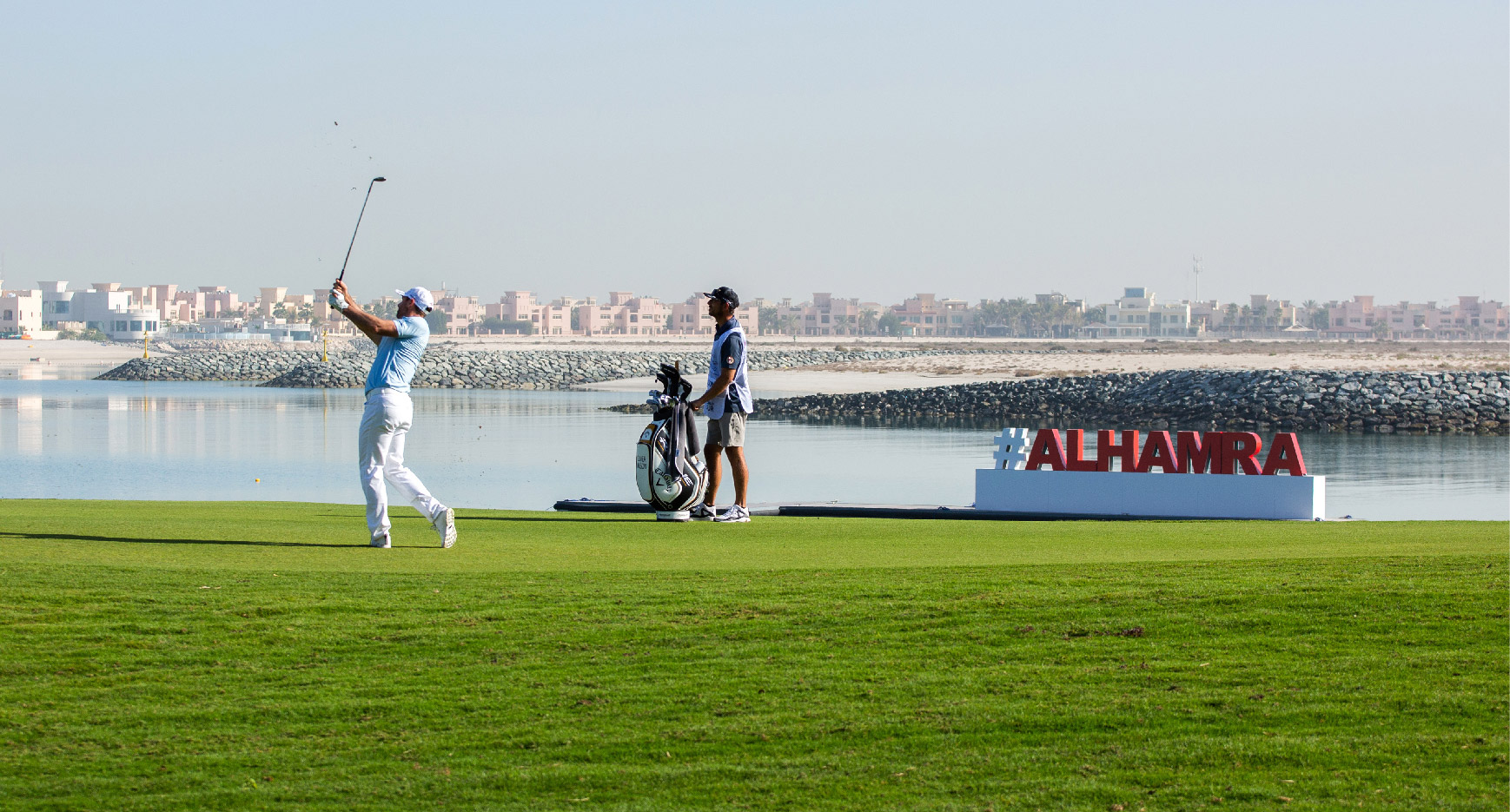 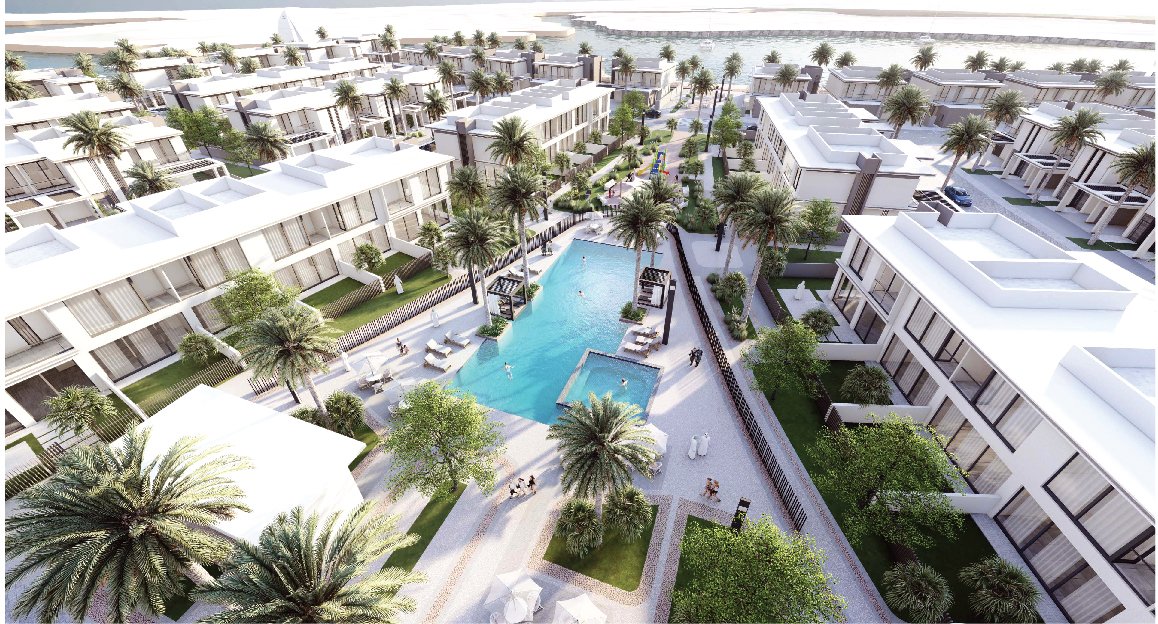 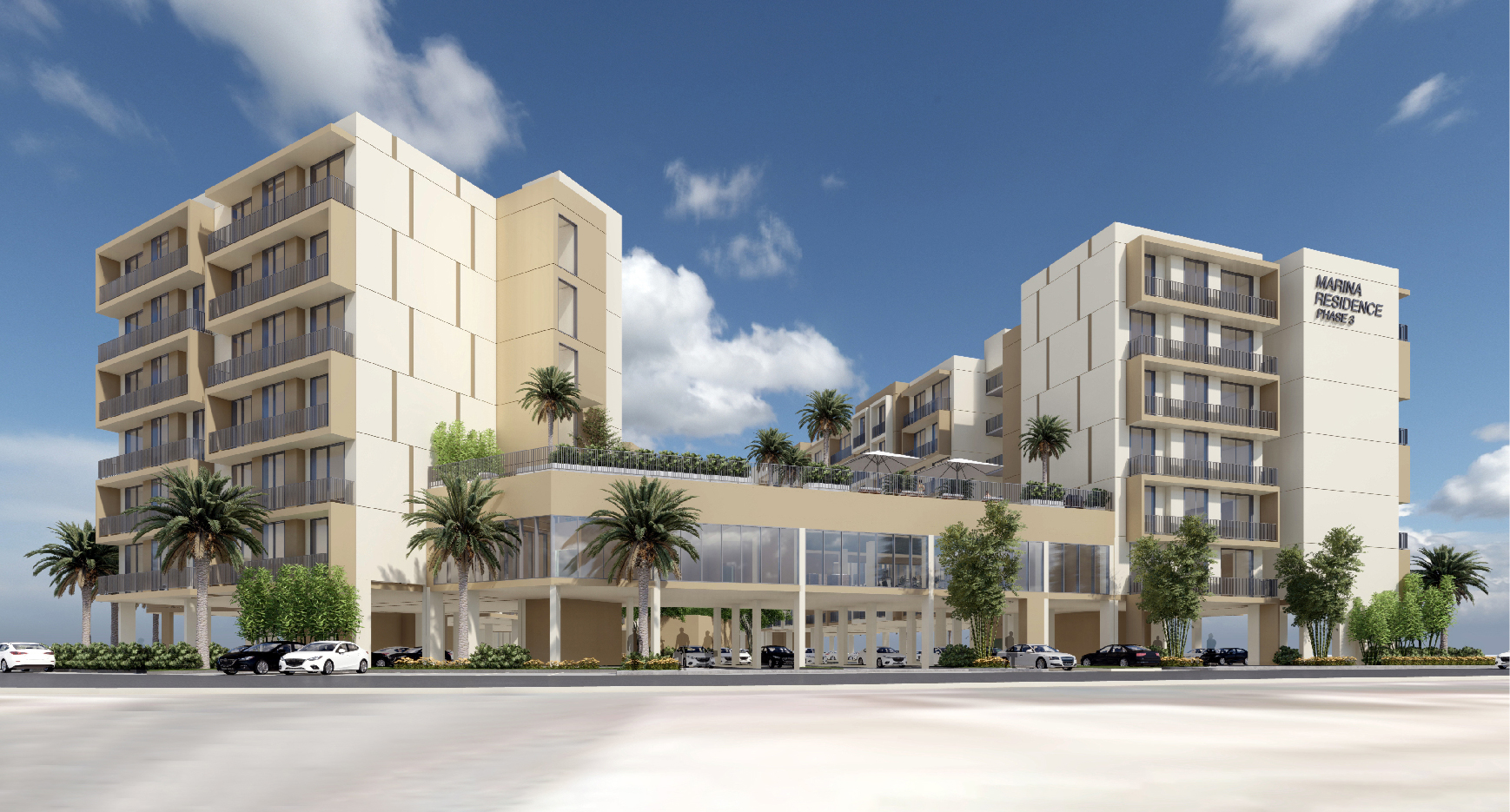 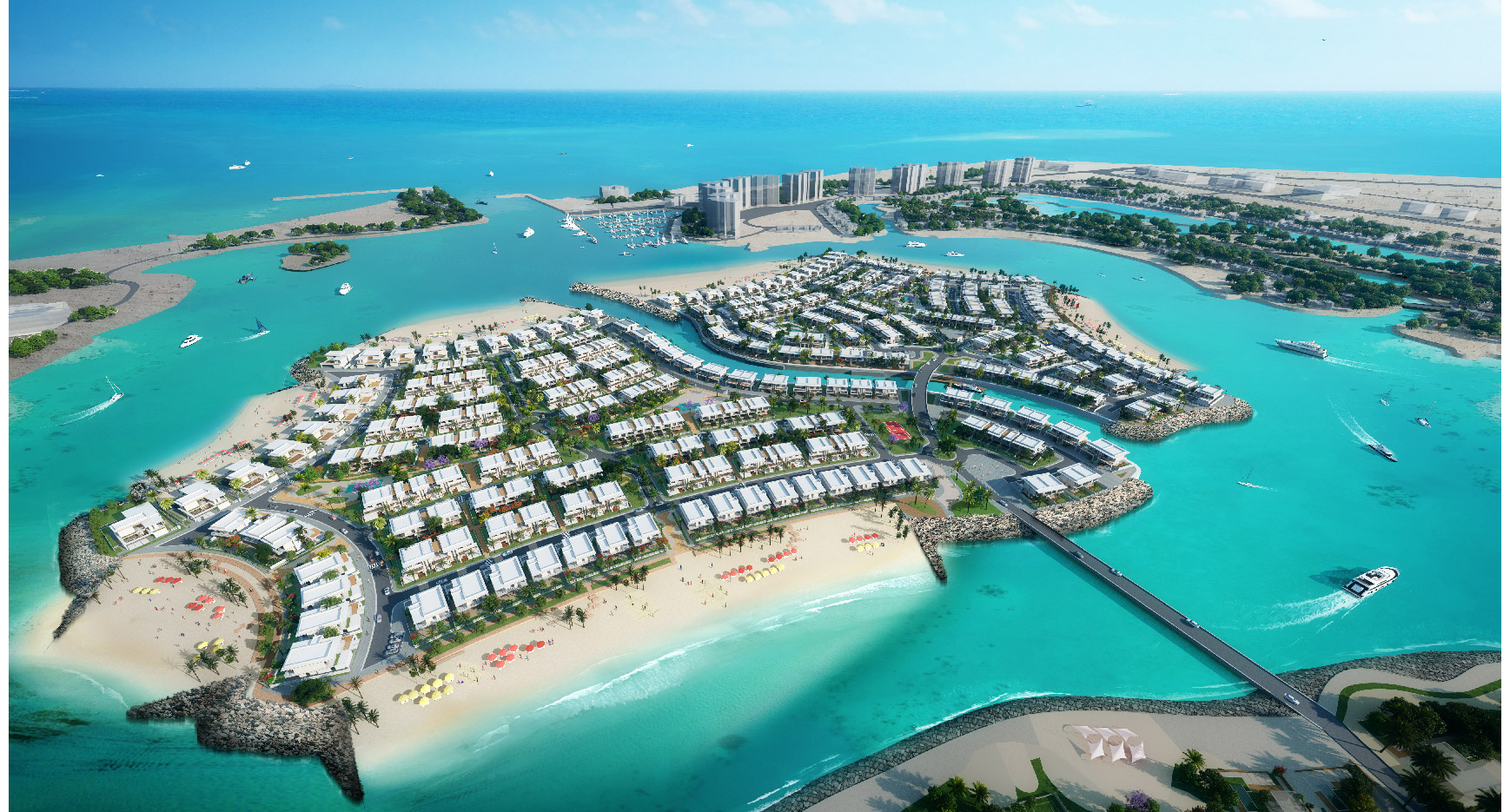